New York artist Steve Keene might not be a household name to most people, but to those in the indie rock world, he’s as well known as Pablo Picasso. With artwork for Pavement’s Wowee Zowee and The Apples in stereo Electronic projects for musiciansas well as his remarkably egalitarian and affordable approach to art – art pieces typically sell for $5-10 and are mass-produced – you’ve probably seen Keene’s artistry on display without even noticing it.

To celebrate Keene’s decades of work and the nearly 300,000 works sold or donated over the years, publisher Daniel Efram has compiled a new book dedicated to telling the artist’s story and showing what the man can do. Aptly titled Steve Keene’s Art Book, it’s out this week on Hat & Beard and Tractor Beam. The collection of essays, pictures and stories will fascinate anyone with even a passing interest in Keene’s work and will certainly inspire you to seek out a piece or two of your own.

We spoke by phone with editor Daniel Efram about Keene’s work and the six-year process to bring Steve Keene’s Art Book live.

Field: Given that you work with The Apples in Stereo, one has to assume that was a good line in the making of this book, but what was your initial connection to the art of Steve Keene?

Daniel Efram: Well, actually, interestingly enough, I met Steve before I worked with Apples. I met Steve in the mid 90s. I started working with the Apples in 2000. I basically met him – I think it was 1994. He was doing these shows – as I explained in the book, there’s a whole section about the place – in an art space called the Threadwaxing Space.

It was an art gallery and they had all these exhibits there. What eventually happened was that I was working at a record company as my first job in New York and going to all these gigs. There was a kind of 90s indie-rock circuit in New York. Those few clubs that were there and Threadwaxing Space were a big part of that, for a short time. I’ve been to shows and at this place her stuff was strewn from floor to ceiling. Literally, it had 14 feet high, really crazy loft-style walls, and it had hundreds of pieces on the wall.

In my early twenties—kinda new to the art scene, if you will—it was kind of like, “Ooh, I’m in a candy store.” Here are some bands I’m interested in playing, and then there’s this floor-to-ceiling piece of art that you can buy for $1-5 apiece. People were asking for various parts. It was just this handbag of bright colors and art, and that you could own it – it was novelty, that you could own handmade art. At that time in my life, it was just a revelation.

Like I said, there were a few clubs we went to, and it seemed like every club I went to, at the merchandising table, there were Steve Keens for sale, as well as the band in which I went to see that there is merchandise.

Steve Keene, I don’t know how he did it, but he was hardworking and he knew he loved music. He was a DJ. He didn’t always do album covers, but as you see in the book, his homages if you will – his album cover homages – he didn’t always do them, but he played with the scene and mixed his metaphors both visually and literally. It kind of worked and because the stuff was so inexpensive and it kind of fit the aesthetic of the “do it yourself” merchandising table, it kind of blended into the scene . His work was still there and I was just fascinated to be able to own original artwork that I love so much.

Your enthusiasm is very evident. Is that what made you want to write this book – to evangelize the whole world?

Well, Steve is an inspiration. It opened my mind to the possibility of owning affordable art. It would mean so much to me over time. I have rooms in my apartment, some of which are depicted in the book. I mean, I could have put all my parts in the book and he probably would have made his own book but I don’t have that many parts. I think there are 400 different examples or something in the book.

I don’t have 400 pieces, but I have a hundred. The bottom line is that when I wake up every morning, in my bathroom, I have a few pieces and I look at them every morning and I smile and it’s inspiring. Some of them date from ’95. I made this book because I awoke to it for 25 years or more and it inspired me. Where does the energy come from? It’s very inspiring. 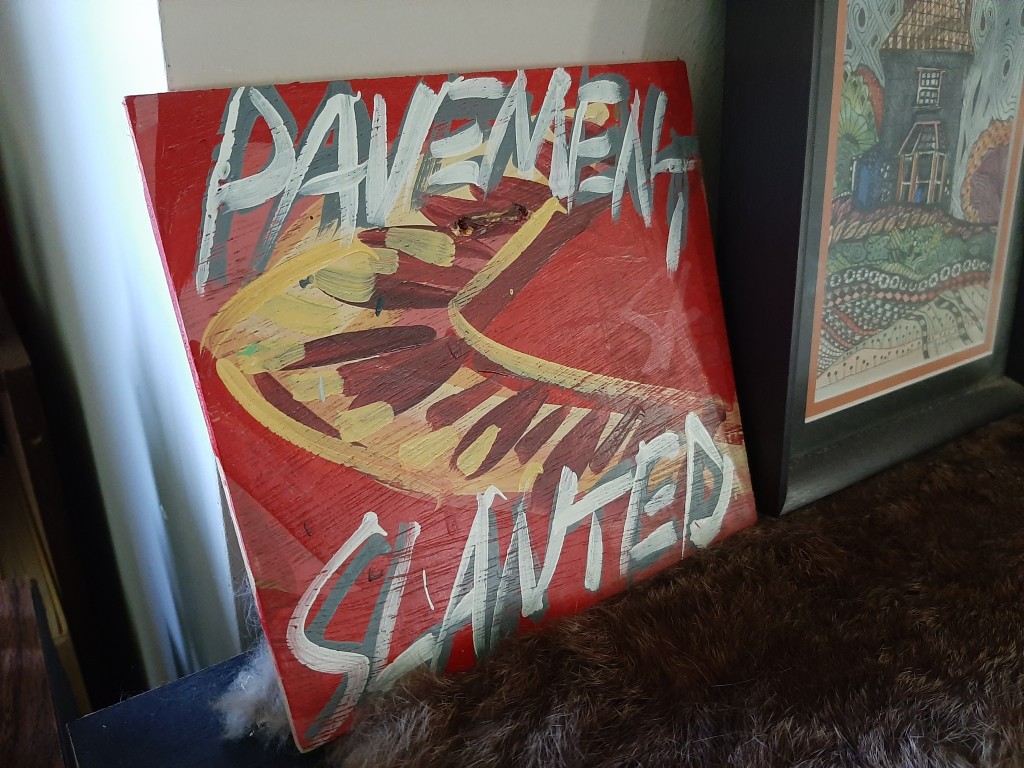 A reproduction by Steve Keene of Pavement’s cover Tilted and enchanted from the interviewer’s own collection. // Photo by Nick Spacek

It seems part of the appeal is that Steve Keene has a very unique, instantly identifiable style, and the ability to look at something and get to know the artist makes you feel smarter than you do. could have otherwise.

It’s interesting. I think it’s inclusion. It’s part of a little nod like, “Oh, I know this artist.” Yeah, you know. Think about it: he made, produced, sold and gave away hundreds of thousands of pieces over his 30 years. He affected the lives of thousands of people and to me that seemed obvious as I continued to work with him and began to realize that he was not archiving his work. The direct inspiration was that I organized a few shows for him. One of them, as you read in the book, was at Shepard Fairey’s gallery in Los Angeles, Subliminal Projects. Working on this project, going through the process, the gallery wants photos of everything submitted to the gallery for their exhibits. For most people it’s probably 10-20 pieces, but in Steve’s case it was 800 pieces, 200 of which were different series.

Because it does multiples, it basically had a square. There were around 200 different pieces that needed to be photographed for their own records. The direct reason I did this is because I was doing an exhibition where I had to provide the photos of the artworks to the gallery, and then I realized, “This has probably never been done by Steve”, and I was crazy enough to facilitate that.

I didn’t really think about it until the opening night of the show when we sold 550 of these pieces and there was a queue that the door literally couldn’t sell. There were people who didn’t fit into the show. Literally, a line at Echo Park. They literally couldn’t get in. And I was just like, “Wow.” After maybe a few months and being able to rest and take a step back, maybe this turns into a book and six years later we’re talking here.

One of the really great things about the book – besides being able to see multiple works of Steve Keene side by side and seeing how things have changed and evolved – are the different pieces of writing contained in the book. A good number of them come from that Threadwaxing Space scene, where they first encountered his work, but what’s fantastic is that, like his work, they’re variations on a theme, but each is completely unique.

I am fortunate to have been able to see his work up close so often that I can also understand how it works. His process interests me a lot. I mean, here’s a guy painting 50 rooms at a time. 12 sets, four copies each, in a chain-link fence cage that serves as his easel so he can hang 50 pieces at a time. You start realizing, “How does the position of the wood affect the end product?

What I began to realize was that I could tell where on the eight-foot-tall chain link the board was positioned based on the kinds of pink drips and splatters that accompanied each different row. If you work from top to bottom, there is more splashing on the bottom due to gravity. It has more paint on top. It then sinks. So if you have a little more paint and splatter, you probably have a piece that was lower to the ground in its chain link fence trestle positioning. Obviously I’m getting into the weeds here, but that’s what the book is all about. These are weeds.